Saturday, July 1 was a busy day for the club. It started a few days before with a plea for help as our usual Dr Bike ‘doctors’ were unavailable. Requests for help on the Cycle Seahaven Facebook page (and closed group page) remedied that and we ended up with more helpers than we’ve ever had previously.

The team established ourselves on the usual pitch outside Seaford Police Station and before long the first of the thirteen bike ‘casualties’ arrived. Typically these are rusty bikes that have been pulled out of sheds by their owners in the hopes they can start riding them again in the summer. The vast majority of which just require proper lubrication and safety checks (the bikes not the owners).

The team had a few punctures to contend with as well, which given the mechanical skills of one of the volunteers proved to be entertaining. Formula One this isn’t and if you’ve never seen a grown man wrestling (and losing to) a child’s pedal cycle then perhaps you should volunteer.

The next Dr Bike is in the Meridian Centre, Peacehaven on the 15th of July between 10 am and midday.

Ellie started her Women’s Festival of Cycling ride from the White Lion. She took a group on a 24-mile cross-country route through the forest and then onto the South Downs Way above Eastbourne. From there they descended into Birling Gap before returning to the forest. 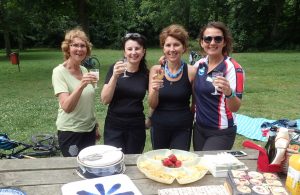 Judging by the comments on Facebook this was a bit like trying to herd cats as some of the riders kept getting distracted by butterflies, caterpillars and every other living creature known to man. When not pursuing said butterflies on a bike (to get photos for a member of the group), she was trying to locate others that had wandered off. What is it about teachers and their need to misbehave when not in school? A sharp blast of the whistle and order was restored.

Once back in the forest the group were given goody bags kindly provided by Cycling UK to celebrate the festival. It appears that the ‘bum butter’ provided in little pots within the bag can be mistaken for lip salve (always read the label!).

If you didn’t know, Cycling UK’s Women’s Festival of Cycling runs for the whole of July. The aim is to encourage more ladies to ride (only 20% of UK bike riders are female). Cycle Seahaven’s ratio is 25% but as one of the ladies said yesterday it seems like more because our ladies have a tendency to be ‘vocal’.

Mark Woodgate’s family ride started in the forest with a brilliant turnout. Parents and children assembled in the car park before peddling to the Candy Canes and then along sections of the red route, before descending down the Snow Run and Final Descent.

Some of these youngsters are going to be seriously good riders in future. If you want to encourage children to ride we thoroughly recommend you bring them along to a Family Ride (hosted on the first Saturday of every month throughout the summer starting at 2 PM).

Both rides joined up in the second car park of the forest for a picnic. Ellie’s ladies had arrived first and having erected the Cycle Seahaven gazebo they got down to the serious business of Prosecco tasting. Both groups enjoyed a picnic and Ellie’s chocolate and raspberry cheesecake, which seems to have been used as a carrot to encourage participation in both rides. The kids, with renewed energy, ran around playing football or Kubb; a Danish game which involves knocking down wooden blocks with sticks. Some of the ‘bigger kids’ also tried racing the little kids’ bikes resulting in at least one crash.

So, all in all, a great day for the club. Thank you to all those that volunteered and assisted with Dr Bike. Special thanks to Ellie and Mark for hosting and coordinating their rides so that everyone could join up for a  picnic. It was a great idea. Plans are afoot for similar events in future; details to follow on the CSH Website,  Facebook pages and Club Twitter account.