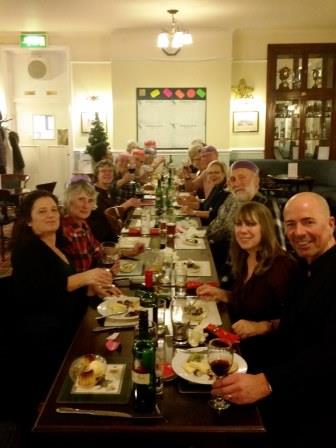 A highly convivial evening was had by twenty-three of us at the British Legion last Thursday. We were there for the Cycle Seahaven ‘Tourers’ Christmas meal; we’d been there last year and enjoyed our Christmas meal so much that we decided to make a return visit.

In contrast to last year when entertainment was provided by Elvis Presley and Elton John (they certainly looked and sounded like the real thing) which was great fun, this year the evening started with Christmas carols sung by Seaford Primary School. A lot of people had turned up to hear them: obviously, mums, dads and grandparents. The children finished their singing to rapturous applause by everyone.

Shortly afterwards we sat down at our table, pulled crackers and commenced our meal. And, very good it was too. Now, the tourers, are finely tuned athletes so we have to watch our diet. However, we felt that on this special occasion we could indulge in some alcoholic beverage; after all, there’s a good selection of beers at the British Legion as well as some fine wine so it would be a shame not to taste some! And, we didn’t have a cycle ride planned for the following morning. So, a fair bit was drunk and there was much merriment: a good time was had by all!

Many thanks go to Dave Sutton who did most of the organising. It was great value for money and already there’s talk of doing it again next year.

Revised Grading System for All Rides
Scroll to top