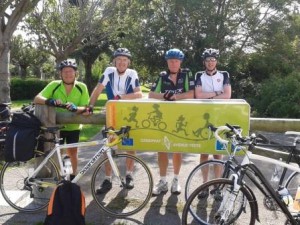 Cyclists on the the Avenue Verte near Dieppe

Last week four of us from Cycle Seahaven,  Joe Hamilton,  David Tyler,  Derek Thorne and me cycled from Dieppe to Paris and back on a route loosely based on the Avenue Verte. We rode on the original section and I was amazed to see more British than French cyclists riding along it. Admittedly,  there was a charity ride on our return trip but there were still plenty of other British cyclists using it,  often in small groups like us. The Avenue Verte is certainly getting popular!

We chose to short-circuit the Avenue Verte about halfway to Paris to reduce the distance,  partly because we were travelling with panniers so inclines were hard work but also because I knew that some parts of the signposted route need improving.

Our trip started with an evening crossing on the ferry from Newhaven to Dieppe where we stayed overnight at the Hotel de la Plage. Next morning,  after a good breakfast,  we set off to cycle about 80 kms (50 miles) to Gournay-en-Bray almost entirely along the signposted Avenue Verte route.

In Gournay we stayed at the Hotel le Cygne (super evening meal and breakfast) and next morning set off to cycle a similar distance to Cergy Ham,  just south of but avoiding Cergy Pontoise. After a few miles of cycling we were surprised to come across a newly constructed section of the Avenue Verte. This is a shared use path along a disused railway line between Gournay and Beauvais and,  just like the original section to Forges-les-Eaux,  is several metres wide and has a tarmac surface which is as smooth as a billiard table! It’s good to see the Avenue Verte being improved;  I was quite critical about some parts of it in my Review of the Avenue Verte last year. 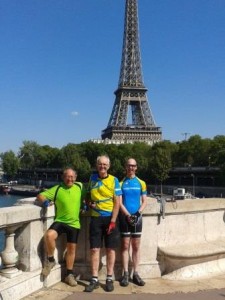 Cyclists near the Eiffel Tower

At Cergy Ham we stayed at the Hotel Au Week-End for two nights which meant that we could leave our panniers there whilst we spent the next day cycling to and from Paris,  a round trip of about 70 miles. We entered Paris via Versailles,  through Parc St Cloud and the Bois de Boulogne and made a beeline for the Eiffel Tower. (This is an entirely different route to the Avenue Verte which finishes at Notre Dame). We only spent a couple of hours in the centre of Paris but long enough to have an excellent lunch at the Café du Trocadero.

Our return route to Dieppe over the following two days was modified so as to include a large part of the new section of the Avenue Verte between Beauvais and Gournay. It’s superb;  must use it next year in a trip to Paris.

Now that the ferry has been saved,  more cycling trips to Paris are possible!

Hi Clive, thanks for your most informative and encouraging report. I cycled to Paris at Easter, but in two days, that was a bit too much to make it enjoyable. I’m very interested to join you next year following your recommended route. Denis

This heatmap of Strava users shows how incredibly popular the section between Dieppe and Forges-les-Eaux is in comparison to other routes: http://labs.strava.com/heatmap/#11/1.33732/49.76222/blue/bike

It certainly is an enjoyable route and I think your route into Paris is a good one.