An excuse to get your glad rags on and party until dawn (or until we’re asked to leave)!

It’s the club’s gift to you, the members.
Entry is free and includes a drink and nibbles.

Crumble, tart, cakes and jams. We’ re going picking by the grams!

A fun day out for fruit picking and lunch. Following an indulging afternoon at the fruit farm we have decided to put on a ride suitable for MTB and Road riders. The route is roads (quiet lanes) and cycle paths. We’ll be heading off at 9am at The Martello tower and will be out until 4/5pm. There is a lunch stop after fruit picking at the lakeside café just down the road from the farm. The farm is a traditional pic your own farm and they don’t weigh you before picking! This is a fun day out and we will go at a pace everyone is comfortable with. The route is 35 miles (with a lunch stop), mainly flat with a couple of small hills but suitable for beginners. This is also a really good way for MTBers to build up road confidence with the support from experienced road ride leaders. Make sure you bring a backpack suitable for carrying the fruit home. Rear lights are required for the road and of course helmets are required on all CSH rides. Youngsters are welcome but must be accompanied by an adult and over the age of 11 years. 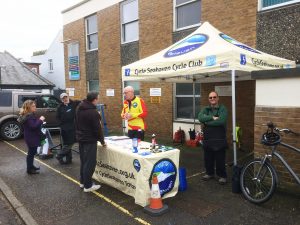 Dr Bike Maintenance Sessions Update. It has become necessary to rearrange our 4th maintenance session, originally scheduled for Saturday 21st September. This session, focusing on gears and chains, will be held on Saturday 7th September immediately following the Seaford Dr Bike session. So that’s 12:30 @ The Police Station in Seaford. Apologies for any inconveniences.

In conjunction with The Egrets Way, Cycle Seahaven will be holding led rides along the trail, and visiting a number of the open houses.

More about this summers Artwave:

This summers Artwave showcases some of the very best creative talent from across Lewes, Seaford, Newhaven & surrounding Villages. The festival will give art lovers the chance to discover new artists, meet the makers, and buy direct from them. The diverse range of work on show includes jewellery, painting, sculpture, printmaking, textiles, ceramics, metalwork, photography and performance art by a mixture of emerging and professional artists and makers.

Follow the art trails to visit creatives in their studios, homes, galleries and workshops and visit 140 exhibitions – all for free!

The festival takes place over three weekends from 17 August to 1 September 2019. Take an time to explore, and with homemade tea and cake on offer too, Artwave is a special summer treat. View the free guide here

Car free cycling around some of London’s major landmarks.

Prudential RideLondon will take place on Saturday 3d August, and showcases the capital as part of the Festival of Cycling led by the Mayor of London’s office. It’ll take in iconic London landmarks including Buckingham Palace and St Paul’s Cathedral. The route will be open from 9am to 4pm and includes a section of the newly opened East-West Cycle Superhighway (CS3).

To assist with planning, the trailer is being organised from Seaford to South Kensington from where the main routes can be easily joined. There were around 70,000 riders last year, so it is bound to be a great event!

Registration for the event itself is free, although the trailer spaces are limited and will be allocated on a ‘first come, first served’ basis. Bikes will need to be loaded on Friday evening in Seaford, and you’ll need to get yourself to South Kensington by 9am on Saturday to pick them up. The bikes will then need to be collected on your return to Seaford, Saturday evening.

This months ladies ride is a little later in the month. As Cycling UK celebrates the women’s festival of cycling this month, it’s something a little different – we’re riding the Cuckoo Trail!

The Cuckoo Trail is a 14-mile footpath and cycleway which runs from Hampden Park in the south, to Heathfield in East Sussex. It passes through the towns of Polegate and Hailsham, as well as the villages of Hellingly and Horam.

The Women’s Festival of Cycling returns in 2019 and events take place throughout the UK in July. We’ll be raising the profile of women’s cycling, putting on events to encourage more women to cycle, and featuring the women in cycling who inspire others. Join us and celebrate the fun, friendship and freedom that cycling provides.

To celebrate the Women’s Festival of Cycling this year Cycle Seahaven is hosting a ride from Heathfield, Sussex, along the Cuckoo Trail back towards Seaford. Bikes will be transported from Seaford to Heathfield using the club’s trailer, which will limit the number of riders to no more than 20. Early booking is therefore recommended. The ride is predominantly off road but on terrain that would be suited to hybrid bikes with the appropriate tyres. The ride is approximately 30 miles long across relatively flat ground. The group will stop at the Arlington Tearooms for refreshments along the way. If you require further details please contact the ride leader, Sarah Winser…

The bikes will be transported to the starting point at Heathfield via the club trailer, therefore there are limited spaces for this event if you require transportation. Book your place now by contacting Sarah Winser via the ride leaders page.

There will be two stops on this ride – one at Hellingly (bring your own snack and drink), and then lunch at Arlington Tea Gardens (cards accepted).

The ride will be at the pace of the slowest rider and is suitable for MTB, Hybrids & E-bikes, riding over a mix of tarmac, gavel and grass.

As always, a helmet must be worn and a spare inner tube, pump, bike lock and lights should be brought.

The History of the Cuckoo Trail:

The Trail largely follows the route of a disused railway line, the Cuckoo Line, which opened in 1880 and ran between Eridge and railway stations, creating a direct route between Eastbourne and London. It obtained its name from the tradition that the first cuckoo in Spring was heard at the Heathfield Fair. The line closed in 1968 under the programme of closures put forward by Forest Row resident and British Transport Commission Chairman Richard Beeching.

In 1981 the route of the old railway line to the south of Heathfield was purchased by Wealden District Council and East Sussex County Council. From 1990 Sustrans developed the route along with District Council and the County Council into a shared track for walkers and cyclists, with horses also allowed on some sections. An extension was constructed to the south into Eastbourne and the trail became part of National Cycle Network Route 21. The Trail is currently used by around 200,000 people per year and serves as a traffic-free route between several local schools. It is jointly managed by the latter in conjunction with East Sussex County Council.

Along the route of the Trail are six original sculptures which act as mileposts. In May 1993 a dozen wooden benches were installed which had been hand-carved by a local artist out of trees felled during the Great Storm of 1987. In 2003 a five-year £65,000 package of grants for improvements to the Cuckoo Trail was awarded as part of the Woodland Grant Scheme. Part of these funds went towards the resurfacing of the Trail as far as Heathfield in October 2006.