A quick glance at the Rides Calendar shows that there are now more Touring rides then ever being run, mainly due to the introduction of Touring Plus and Easy Touring rides.

Originally, Touring rides (Level 3 on the Grading system) were for those road cyclists who could maintain a moving average speed of 12-13 mph over moderate terrain. Over the years, as more members joined these rides, it became clear that some would like to go at a slightly faster pace and others a tad slower. Eventually, the Touring Plus and Easy Touring rides were introduced to cater for the wider speed range; the former have proved popular but the latter less so. This may be because there hasn’t been a clear distinction between Easy Touring and Touring as between Touring and Touring Plus.

Therefore the moving averages are being adjusted slightly, wef next Tuesday 6th October, as follows:

These moving averages should be treated as a guide to the pace of a ride. In practice, rides may be a slightly faster or slower depending on various factors such as terrain and wind strength.

Hopefully, members will find the clear distinction between these three types of ride helpful in deciding which they prefer to cycle. This topic will be kept under review and feedback sought from cyclists at the end of rides.

A key feature of our rides is that they always include at least one café stop. However, café stops are a bit different these days with the Covid-19 restrictions but just as enjoyable. Clearly, we have to social distance but this isn’t a problem as we always stay outdoors as you can see from the above picture.

If you haven’t been on one of our rides then why not give them a try. We’ll be pleased to see you.

The touring rides are resuming after a four month gap. The first two rides will be on Sunday 19 July, One will be a Touring Plus (13½ mph average) ride to Bexhill and the other a Touring (12 mph average) to Horam. Details are on the Rides Calendar.

Café stops will be outdoors and we’ll endeavour to go to places that have outside toilets at the café/tearoom or nearby.

The CTC Winged Wheel plaque, which used to be on the old Lamb Inn at Ripe, has been restored and is now mounted on the wall at the front of the Ripe Village Stores. The above photo was taken by a lone cyclist who was passing through Ripe on Wednesday afternoon: Dave Sutton.

It’s almost two years ago when I took a picture of the derelict pub and posted an entry to the blog about the Winged Wheel. These cast-iron plaques, two feet in diameter, were issued by the CTC about 120 years ago to approved inns and hotels. The Lamb was clearly an approved inn so it’s seems apt that it should be transferred to the Village Stores opposite which has a superb cyclist friendly café inside. The plaque has been restored by members of the East Sussex CTC.

The café is, of course, closed during the Coronavirus outbreak but I’m sure that when the restrictions are lifted plenty of cyclists will be visiting the café as soon as it reopens. I know that the café proprietor is intending to have a ‘Winged Wheel’ event one Sunday at which local cycling clubs will be invited. We’ll certainly be there.

The picture on the left was taken in May 2018. It shows a CTC Winged Wheel plaque on the derelict Lamb Inn in Ripe. The plaque had probably been there for over 100 years. I posted an entry on this blog at the time; we hoped the plaque could be saved although we feared it could finish up in a builders skip. Fortunately, the village stores opposite the pub was on the case.

Now, I should explain that the Ripe Village Stores includes a superb café. It’s a favourite of the tourers; in fact we visited it more times than any other café last year. It’s very cyclist friendly, the food, tea and coffee are great and we often meet other cyclists there as well

Over the past 18 months or so the plaque has been saved, handed over to the village stores and restored (it was in a bit of a sorry state) by someone in the East Sussex CTC. It’s now in pristine condition as you can see from the picture on the right.

The plaque is very heavy, being made from cast iron, but Derek managed to lift it onto a table so that I could take a photo. The next stage is for it to be mounted on the wall outside the café. This won’t be easy given it’s weight and size: about two feet in diameter. The café proprietor has advised us that when it’s installed there will be an opening event on a Sunday at which cycling clubs will be invited. We’ll certainly be there. Watch this space for more news. 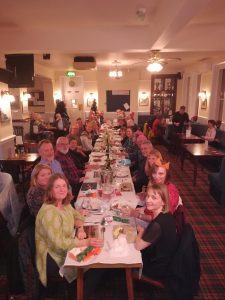 This ‘End 2 End’ cycle ride involves cycling the entire length of the UK, a challenge that is on the wish list of many cyclists. In fact many thousands of people undertake the challenge each year.

If you have ever fancied riding an ‘End 2 End’ but were unsure about how to do it, or found some of the organised trips a bit arduous or too expensive, you could be in luck! Phoenix-CTC is planning a supported JOG-LE ride starting 16th May.

JOG-LE is John O’Groats to Land’s End which, of course, is the reverse direction of the more traditional Land’s End to John O’Groats (LE-JOG).  It will take 15 cycling days to cover the 1000-mile distance.

If any Cycle Seahaven member is interested in coming on this trip please could you contact me, Dave Sutton, via the Ride Leader Contact page. I’ll email you the key facts document containing the preliminary trip details, costings etc. There is no need to commit to anything at this stage; it’s just an ‘Expression of Interest’.

It is anticipated that the decision as whether the trip will run will be taken by late October, giving plenty of time to train for the ride.

Phoenix-CTC is a Member Group of Cycling UK, with most of the committee also being Cycle Seahaven members who ride regularly with the Touring Section.

2019 is turning out to be a good year for  touring rides. There have been more such rides than at this time in any previous year. Also, there is an upward trend of cyclists participating in them.

Today’s ride to Horam attracted thirteen Cycle Seahaven members, a record number for a touring ride. It’s good to see the numbers gradually increasing on our touring rides, not only on Sundays but also on our Tuesday and Thursday rides.

All our rides include a refreshment stop;  today we stopped at Tpodz Café in Horam which used to be Wessons. It’s become one of our favourite cafés over the past few months.

Today’s ride was a round trip of 33 miles and, as usual, the cycling was mostly along quiet country lanes and even included a short section of the Cuckoo Trail. All in all this was a very pleasant ride.

Our rides this week will be to Muddles Green on Tuesday and to Bexhill on Thursday. Details are on the Rides Calendar.

If you’d like to cycle on one of our touring rides but feel they’re a bit too long and/or a bit too quick then you’re in luck! A new type of touring ride is being launched which may appeal to you.

The first such ride will be next Tuesday, 11th June. The distance will be 18 miles and include a café stop at Upper Dicker. Full details are on the Rides Calendar.

Easy Touring rides will initially be held on an occasional basis but if they prove popular then they will be organised on a weekly basis.