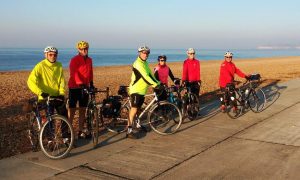 Seven tourers met at the Martello Tower this morning; five were going to Horam but the other two decided to head for Newhaven ferry port and hop across The Channel to Dieppe to do a short tour of Upper Normandy. The sea was like a mill pond so they should have had a smooth crossing. I wrote about channel hopping to Dieppe in the latest issue of the Cycle Seahaven newsletter (seahaven cyclist). We are fortunate to have a ferry port on our doorstep; Dieppe is only four hours away. Next year Phoenix-CTC is aiming to have several cycling trips to France using the Newhaven-Dieppe ferry starting with a Dieppe Channel Hopper over the May Day bank holiday weekend.

As for the other five, we had a very pleasant ride to Horam using a slightly modified route to the norm. The touring ride next Sunday will be to Heathfield. I wonder if anyone will hop across the Channel instead!