We’re lucky to have a ferry port on our doorstep, so to speak, which means that France is only four hours away. And, of course, the quiet country roads and véloroutes of France are a great place to go cycling. So, with that in mind, nine Cycle Seahaven tourers hopped across the Channel to Dieppe for three days of cycling over the May Bank Holiday Weekend.

The English Channel was like a mill pond as we sailed from Newhaven to Dieppe, arriving mid-afternoon. After booking into our hotel, the Hôtel de la Plage, we sampled some of the delights of Dieppe including the famous Café des Tribunaux, see picture below. 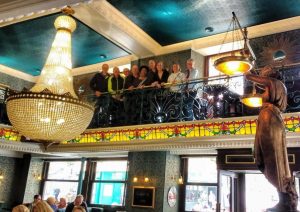 Tourers inside the famouse Cafe des Tribunaux in Dieppe

Next morning was a delayed start as we waited for the rain to pass. It eventually passed so we set off mid-morning through the streets of Dieppe and into the countryside towards Neufchatel-en-Bray. It was an easy ride along the mostly traffic-free Avenue Verte to Neufchatel where we had an excellent lunch. On our return journey we were surprised to find a newly constructed part of the Avenue Verte for the final few kilometres into Dieppe; so new that it hasn’t been officially opened yet!

Next day we cycled out of Dieppe towards Pourville for the start of another superb greenway, the Véloroute du Lin, on our way to St Valery-en-Caux for lunch. The weather was superb and we were able to have our lunch outside a cafe; suntan lotion was applied probably for the first time on a bike ride this year. Then it was back to Dieppe along the coast on the Véloroute du Littoral although this was mostly along quiet roads. 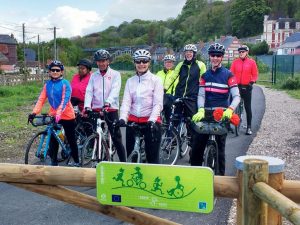 For our third day of cycling, by popular request, we climbed the long hill into the Forêt Domanale d’Arques. We had climbed this hill on a previous channel hopper; it’s quite challenging in that it isn’t too steep but climbs for about 1½ kms. After that we headed to Criel-Plage at speeds we’re not used to as tourers; we felt like sportives! I have to admit that we were aided by some strong tail winds and some long downhill and flat stretches.

After a cafe stop at Criel-Plage we returned to Dieppe for a late lunch, afternoon tea at our hotel where we picked up our luggage and a pleasant evening mini-cruise across La Manche to Newhavem.

All in all, this has been three great days of cycling, some highly convivial evenings and lots of fun. Same again next year?

This cycling trip was organised through Phoenix-CTC, a member group of Cycling UK.

Ladies Ride to the Beanstalk Tea Garden – Saturday 4th May