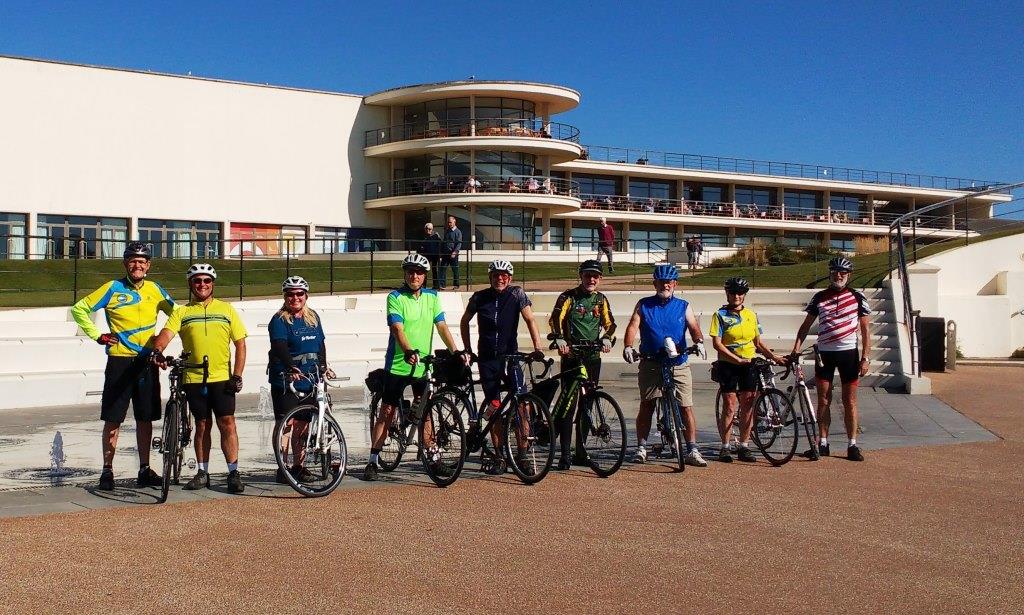 Cyclists outside the De La Warr Pavilion at Bexhill

Autumn was suspended for a few days this week; summer returned! The weather was warm and dry with virtually no wind; superb conditions for cycling. In fact, the lack of wind meant the cycling was easier than usual and we were in danger of exceeding our average touring speed of 12 mph! (We could have promoted ourselves to the Intermediates)!

On Tuesday we cycled to the Old Loom Mill café on the Cuckoo Trail at Summerhill where we basked in the sunshine as we had our elevenses.

It was even hotter on Thursday. Nine of us rode to Bexhill; a round trip of 44 miles which is mostly reasonably flat, apart from Chapel Hill so makes for quite a relaxed ride. The good weather certainly attracted plenty of cyclists onto the roads; it would be no exaggeration to say there were more cyclists than cars on the stretch between Pevensey and Bexhill.

We couldn’t resist a photoshoot outside Bexhill’s iconic art deco building, the De La Warr Pavilion, before commencing our return journey. A final café stop at the Arlington Tea Gardens (24 degrees by now) before returning back across Chapel Hill to finish our ride at Friston Car Park.

All in all this had been a terrific ride to Bexhill: great company, superb weather and a nice route. It’ll be back to autumn for our ride next Sunday which will be to Horam.

Fantastic write-up, Clive. Lovely to see the tourers continuing to take in the very best of the local routes.
We’ve certainty had some great cycling weather this year, with more promised for later in the year. Keep up the good work

London to Brighton off road 2018
Scroll to top