In my last update I discussed the possibility of getting a pump track build at the Salts Field in Seaford. This could still be a possibility but, due to Craig leaving his position and funding being secured for the skate park and not a pump track, it looks like this will need to be on the backburner for the time being.

However, I have just come from a second meeting with Chris (Project Manager for Lewes District Council) where Tom (Pump Track Consultant for Velosolutions UK) attended to see if the proposed site below Newhaven Fort would be suitable.

Firstly, an update on funding, Chris has applied for some funding from the District Council that is tied into the regeneration of Newhaven Town Centre. He hopes the funding (£100,000) could be available next year

£30k of funding from Newhaven Town Council has been promised for the skatepark and pumptrack project subject to additional funds been secured. A Stage One Veolia application has gone in and been accepted so we need to spend December evidencing the need for the facility in order to get the Stage 2 application in by January 4th: we will know in March 2018 if this has been successful. This means that hopefully we will have £80k early next year to use for the skate park/ pump track. We are also going to look at other funding options to push up what we can spend on this. One of these could be Cycling UK but if you have other ideas please let me know. 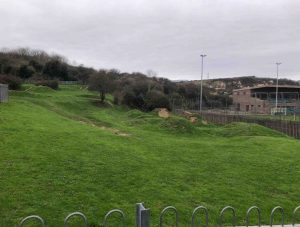 The site has good access for works and it looks like soak-away drainage shouldn’t be an issue, but Chris is going to organise topographical and geotechnical and environmental survey for the site so that we know exactly what we are dealing with. For those of you who don’t know the current site, there are a few dirt jumps that snake down over two distinct terraces. Typically a pump track needs to be on a level piece of ground. At first we worried that this would be a major road block for the project but Tom had a great idea of incorporating a smaller ‘beginner’ track on the top level and a full sized track on the lower level. Each terrace would link with the skate park and possibly the two tracks would link together too. This would give the tracks a really unique design.

From the image you can see the upper level to the top left and the lower level will span from the trees in the centre along the bank and all the way to the fence on the left and bottom of the image. We’re probably looking at around a 40-meter beginner track and 125-meter main track.

Tom is going to work out some basic designs for the Stage 2 Veolia bid, at some point in the new year.  We can start deciding then on what features and design parameters we would like on the pump track.

All in all we would be looking at a June/ July build date.  The opening could be a lot of fun.  Velosolutions will invite some pro cyclists and record a promo video of the track for the opening. I would also hope that we can get the Cycle Seahaven gazebo up there and include a Dr. Bike session to get the kids on their bikes enjoying the track straight away.  But this is a way off yet.

This is brilliant news and I’m sure something the club would want to actively support. Well done Jon. Thank you for taking the time to ensure that a cycling based project is firmly on the agenda.

Another Super Christmas Meal for the Tourers
Scroll to top