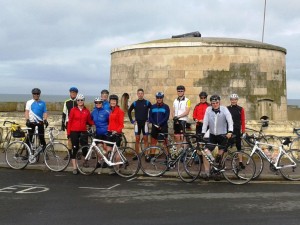 Cyclists at the start of the ride to Horam. More joined as we were leaving.

Judging from the number of cyclists riding along the country lanes it’s clear that road cycling is becoming very popular. A few years ago, we saw very few cyclists on the roads on Sunday mornings. It’s great to see this increase in popularity!