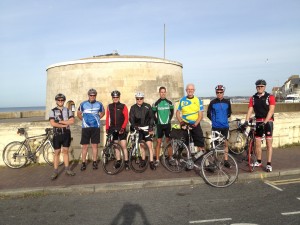 Both groups had to make a small diversion at Chapel Hill due to the road being resurfaced. Sticky tarmac and 23mm tyres doesn’t go down well and neither does splattered tar on your bike frame.  The sportive ride was fast and we made good time to Bexhill. We refuelled with coffee and bacon sandwiches at the Italian Way Cafe on the seafront and then headed home via Eastbourne and Beachy Head. Total 54 miles at an average of 16.6 mph.

Clive reported a good ride although shame about Chapel Hill. However, we had other hills to climb, between Hailsham and Heathfield! We made good time to Heathfield and maintained our touring pace average of 11.5 mph (may have been a fraction faster) even though we climbed some hills; slow by your standards of course. Lot quicker coming back! I like this route, one of my favourites, as it’s quite varied in terrain and passes through some superb countryside; I especially like the section between Lions Green and Muddles Green. It’s 42 miles and can easily be extended into a half century which I’ll do later this year.

Incidentally, the Rendezvous Cafe at Heathfield has changed it’s name to an instantly forgettable one. Begins with ‘A’ I think.