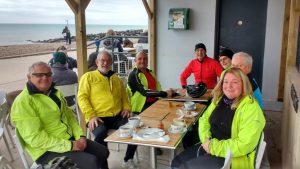 New Year’s Day was an excellent day for cycling: dry and sunny with virtually no wind. Eight of us cycled to Molly’s Café at Rottingdean for our first touring ride of 2019.

It was a normal Tuesday ride for us although our average pace was slightly slower than our usual 12 mph due to the promenade between Saltdean and Rottingdean being rather crowded with walkers; hardly surprising given the good weather for New Year’s Day. It was definitely a case of ‘share with care’!

So, having got 2019 off to a good start, perhaps we will surpass the figure 120 touring rides of last year.

In 2019 we will continue to have three touring rides each week: Tuesday, Thursday and Sunday. The Tuesday rides are the shortest at about 25 miles and the Thursday rides are the longest, usually between 40 and 50 miles. The Sunday rides are usually about 35 miles, give or take a few miles.

That said, there will be some variations. For example there will be at least one Century ride (100 miles), a ride to Littlehampton which is a round trip of 70 miles and the Romney Marsh ride will be on a Sunday rather than mid-week.

Also, some tourers will be doing Phoenix-CTC rides such as the Dieppe Channel Hopper in May, a Tour de la Manche in June, a cycling trip to Amsterdam in July and to Paris in September.

So, there should be plenty of cycling for the tourers in 2019.

Another Great Year for the Tourers!